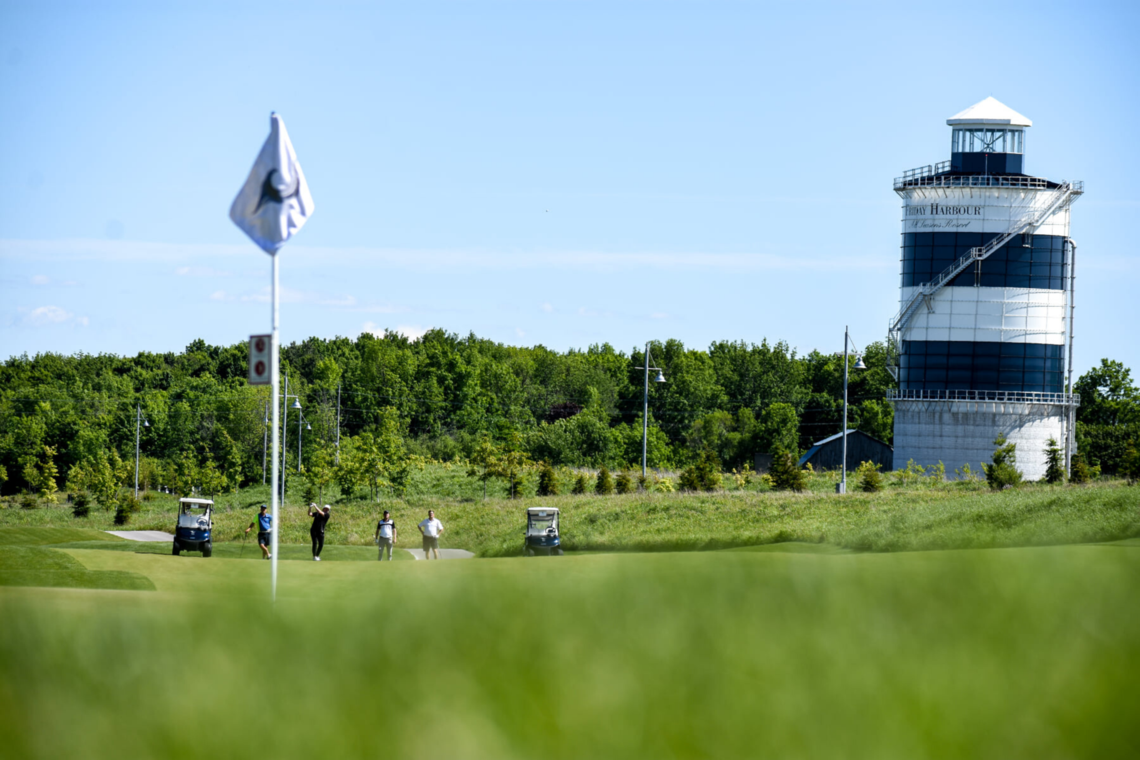 The second Saturday in June probably wasn’t the best time for Steve Grass to be readying his golf club for its first tournament of 2020 and its first time hosting an RBC PGA Scramble local qualifier. There was the COVID-19 pandemic, yes, but that wasn’t the primary distraction for the club manager at The Nest Golf Club at Friday Harbour, a newish Doug Carrick design east of Barrie, Ont., near Lake Simcoe.

Grass and his wife had welcomed their third child into the world just nine days earlier, which meant his mind was racing in a million different directions. A newborn, a global virus, safety protocols, and a 22-team event filled with golfers desperate for competition and some sort of normalcy. Grass called Brittany Mullin, operations manager for the RBC PGA Scramble, and expressed his angst. “What do I need to do?” he asked her. “What do I need to have ready?”

Mullin quickly put Grass at ease. Just check each participant in, she told him, and be sure to collect their course fee. The PGA of Canada will take care of the rest. And by and large, that’s exactly what happened.

“The hardest thing for us, because we offered a food coupon, was to try to keep up with the food orders,” Grass laughed.

After much deliberation given the global health crisis under which the world now lives, the RBC PGA Scramble presented by The Lincoln Motor Company kicked off for 2020 on June 13 at both The Nest at Friday Harbour and Minnedosa Golf and Country Club in Western Manitoba. The event is following the precautions taken by golf courses throughout Canada to ensure player safety, and has mandated staggered tee times rather than shotgun starts to avoid large gatherings as well as online scoring to reduce touchpoints. Also new for this year is a charitable donation option to The Frontline Fund for entrants, enhanced scoring vetting via the new World Handicap System, reduced yardage for female players, the guarantee of an all-female team at regional finals where possible, and prizing from new sponsor Titleist and FootJoy. A list of local qualifying sites, which includes another public outing at The Nest as well as one for members only, can be found here. To date, a whopping 3,370 Canadians have signed up at 128 courses. June events, in fact, are averaging 70 players per event, a higher total than in past years.

“We had such a good response, we said, ‘Hey, why not? Let’s host another one,’” stated Grass. “We recognize that this is basically the hottest golf tournament maybe in North America. It’s definitely got some chops behind it. You look at how the PGA runs it, they basically do everything for you. It’s a no-brainer for a facility like us to take an afternoon where, I wouldn’t say we wouldn’t be busy, but basically be guaranteed revenue, which is awesome. In a year where a lot of golf tournaments are cut, opportunities like this, let’s call it more of a golf outing with tee times, makes a lot of sense for us. It’s an easy day for our team. It’s a busy day, but it’s an easy day for us to facilitate and there is lots of buzz around the event.”

Like Grass, Patrick Law, head professional at Minnedosa G&CC, was keen to get in on the action after following the progress of the popular event from afar. However, when the novel coronavirus hit he wasn’t sure what kind of response his club would get.

“Part of me thought it would be tough to get the minimum number teams to sign up and another part of me thought people are anxious to get into some kind of organized event and get golfing and out and socializing a little bit too,” explained Law. “There were two sides of me that were on both extremes of what to expect.”

As it turned out, Law had nothing to worry about. Minnedosa hosted 19 teams, some coming from the Winnipeg area two hours away. It was one of those squads that ultimately prevailed with a 13-under-par total for an adjusted score of 18.5 under.

“We knew we had a good chance. We figured it would take 12 to 14 under to win it. We shot 13 and the wind was just howling, gusting up to 50 km,” said Jacques Remillard, noting his winning squad of himself, Joel Messner, Eric Trudeau and Alex Sabourin — all men in their mid-20s — played Minnedosa for the first time the day before and spent the night in Brandon. “And the back nine at Minnedosa is kind of like a links style. And we didn’t have a good front nine and the back nine, when we hopped on that links style, we knew we needed to have a big back nine and we rifled off seven birdies in a row. Coming off of that, we thought, at 13 under we have a good shot here.”

Remillard noted how well everything was run by Law at Minnedosa and how safe the day was. His team were conscious of physically distancing on the course and had a system for reading putts whereby one player would stand behind the hole and the other two behind the player putting but six feet apart. Minnedosa utilized cart dividers to allow for multiple riders, while other places, like The Nest at Friday Harbour, have mandated single-rider carts.

Remillard’s crew now moves on to the regional qualifier at Winnipeg’s private Elmhurst Golf and Country Club, though the ultimate goal of advancing to the national final at Cabot Links in Inverness, N.S., may have to remain a dream even if the team is successful at Elmhurst. Given COVID-19 and current provincial border closures in Atlantic Canada, a decision has not yet been made on conducting the nationals. The PGA continues to monitor the situation and has three different plans in place.

“Right away I was like, ‘I want to play in this so bad,’” Remillard said about the carrot of Cabot Links. “It’s not about winning, but I’ve always wanted to play Cabot since they opened that course.’”

Back in Ontario, Patrick Lee also has his eyes on a possible trip to Cape Breton, but for he and his team of Steven Sung, Alvin Yeung and Timothy Chu, it would be a return voyage. The quartet, which finished second at The Nest at Friday Harbour tournament to advance to the regional qualifier at Summit Golf and Country Club, made its way to nationals two years ago.

“To us, this is our major,” said Lee, 45, explaining that his group played a lot of golf together at the old Mandarin Golf and Country Club (now Upper Unionville Golf Club) before children came along. “We don’t golf very much anymore, but when we do this is the event we gear up to.”

Lee and his team, which carded a remarkable gross score of 56 and still lost to the squad of Jeff Beedham, Joey Chua, Richerd Kivioja and Bill Commu, were dining at Bonefish restaurant at Friday Harbour Resort and monitoring live scoring back at The Nest when they realized they had advanced. This is the third straight year they have entered the RBC PGA Scramble.

“We had heard the return trip (to Cabot Links) is always the hardest and we experienced that last year,” stated Lee.

As for the event on the whole, Minnedosa G&CC’s Law gave it the ultimate compliment upon a successful first foray and summed up the way most people in the golf industry feel at the moment.

“I think it’s everything that’s great about golf. It’s everything golf should work towards,” Law said, noting he’s already carving out a spot in the club’s 2021 calendar for another local qualifier. “It’s fun, it has a competitive nature to it for those who are into that, but if you want to just go have fun it includes golfers of all skill levels, genders, ages. It’s inclusive of everything and brings everybody into the equation with the handicap system. "

“At the end of the day I’m pretty happy to be doing these events in these times rather than complaining about what we can’t do.”