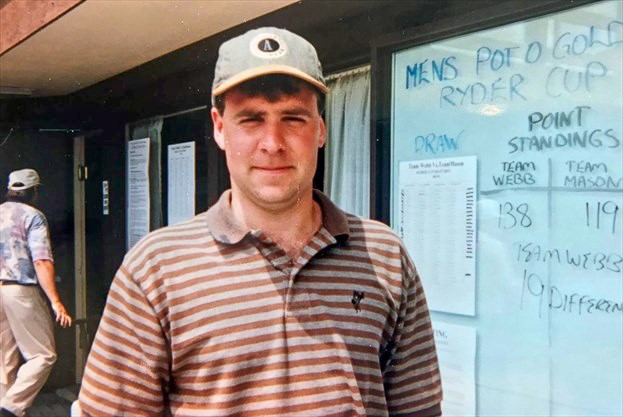 You know how you sometimes think, for careers that you never selected, that if you did choose a certain one, you would aspire to be exactly like someone you know?

I do it all the time. I do it for lawyers, judges, teachers and principals, NHL players, family physicians, investment managers and yes, even politicians. If I was ever going to be a head golf professional, this much I know. From the day I met him til forever, I would want to be Ian Webb. No ifs, ands or buts.

From 1993 to 2000 he made such a mark on our club that 20 years later we still talk about him. And truth be told, to this day some of us still dream of his return, maybe in a semi-retirement stage, to watch over the club where he first became a head pro and touched so many of our lives, as golfers, and as human beings.

Many call what Ian is in the middle of right now a battle with cancer. Without a doubt one of the most insidious forms of the wretched disease.

But to watch how he and his wife Helen are handling the cards they've been dealt, you wouldn't call it a battle as much as you would simply say that Ian is choosing to live life the best he can for whatever time he has.

In a way that in typically Webby fashion, sets a new standard for all of us to follow. #webbystrong has become the most popular hashtag within the Canadian golf community, as his friends and colleagues go out of their way to express their love for him and their appreciation for what he continues to accomplish over what has to be considered the career of all careers in the Canadian golf industry.

Ian Webb is the kind of person that you remember exactly where you were when you first met him.

It's more than 25 years ago for me. It was early in my own career and I was not playing much golf. And it was before I moved back to Peterborough and rejoined the club I had played at and worked at as a kid.

Someone had invited me to play on a Saturday morning. We were on the patio after the round and the new Head Pro walked by and saw us, and came over and introduced himself. It felt like the whole patio was buzzing about this guy. The way everyone was talking about him, talking with him, asking him questions, it really caught me off guard.

I remember saying to myself, "who is this guy?" He seemed to go from table to table, talking to everyone.

But it wasn't just small talk. He was talking to this person about replacing their grips, this person about an upcoming lesson, someone else about some custom order that had arrived for them at the shop. He must have asked another four people how they played.

And it was his second month on the job. Who was this guy? He was handsome, fit, dressed exactly how I imagined a golf pro of my generation should dress, like Freddie Couples back in the day, khakis and Ashworth golf shirt with just the right level of athleticism and polish.

And to top it all off the guys I played with that day said he was an amazing player. Less than an hour later he was with me on the practice range checking the lie of my irons by having me hit balls off a piece of plywood and seeing where the contact was being made on the tape he had secured on the club's sole. Who was this guy?

You learn a ton about how a membership feels about its head pro by observing how much they are wearing what he wears, playing what he plays, and the degree to which they feel committed to buying in his shop and supporting the events that he champions, be it a pot-o-gold scramble, couples 9-holer or GAO qualifier.

I am by no means a retail expert, but I know enough to recognize that Ian was a master of that. His entrepreneurial instincts were well developed even in that early part of his career.

I remember the blood, sweat and tears he put into building beautiful wood shelving in his new shop to make sure the logo'd shirts displayed there looked extra inviting.

I've been going through some club photos from the 1990s and I couldn't help but smile when the impact of Ian's retail mastery was staring right back up at me, when almost every photo from 1993 to 2000 has members sporting these PGCC embroidered sweatshirts that he introduced.

They were unlike anything any of us had seen before, they were thick and hot, far from the weight of today's lighter fabrics, but they were new, and they allowed you to proudly boast of your affiliation with the club when you were away from the course. And just having one made you part of Ian's flock. I swear he must have sold a thousand of them. Who was this guy?

Ian understood from a young age that for his profession, the most important thing is to never forget that you're in the service business. You're not there to show off your own game, set a new course record, or prove how much you know about the swing or the rules.

Ian believed that the few hours you spent at your club should be a break from the hectic craziness of your professional and personal life.

Ian better than anyone I have ever met understood the kinds of little things he could do to make your afternoon at the course a great one, to keep you coming back time and time again, more engaged in the social, strategic and athletic parts of the game than you've ever been.

So many of us wish that he could have stayed at our club longer than the seven years he did. But we also know how lucky we were to have had him here in small town Peterborough that long, when he no doubt would have had some amazing dream job offers after only half that long.

In our work, in our personal lives, we are always hearing that we should try our best. That that is the most you can do. While true, it is inspiring to witness those people among us who not only do that, but who take things to a whole new level. When you see them in action they make you smile, they make you stand back and just say, as I did 25 years ago, "Wow … who is this guy?"

He's Ian Webb and in my books, as with hundreds of golfers I know, he is a legend, one of those truly good guys. And one helluva player. #webbystrong indeed.

This story originally appeared in the Peterborough Examiner and was written by Paul Hickey.