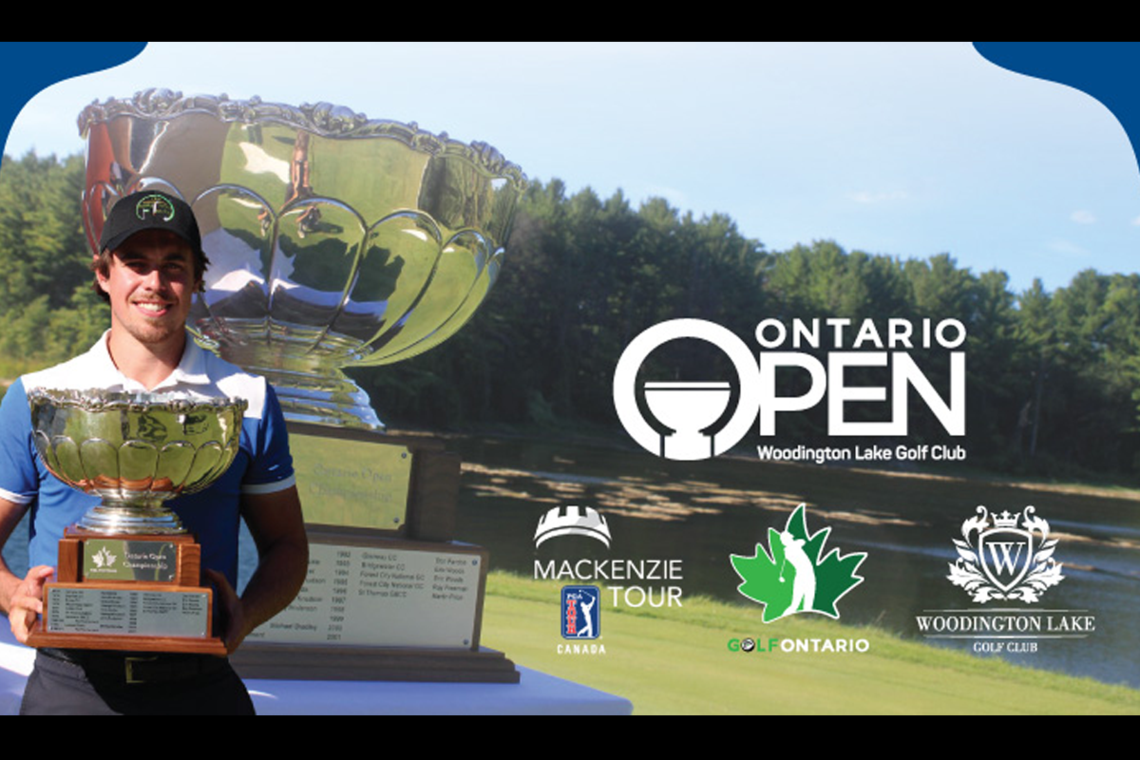 TORONTO, ONT– The Mackenzie Tour – PGA TOUR Canada and Golf Ontario have reached an agreement,  in partnership with Woodington Lake Golf Club,  that will see the Ontario Open played in Tottenham, ON starting in 2020 from August 24-30.

Debuting in 1923, the Ontario Open’s past champions include: Sam Snead and Moe Norman, along with Canadian golf legends George Knudson and seven-time champion Nick Weslock. Following a 23-year hiatus, the event returned for its 63rd edition in 2019 and was won by Greg Eason, who finished fifth on the Mackenzie Tour in 2014 and has played 31 career events on the Tour.

“The Ontario Open has a rich history in Canada, and the Mackenzie Tour is thrilled at the opportunity to be involved with such a storied event,” said Mackenzie Tour – PGA TOUR Canada Vice President Scott Pritchard. “We’re looking forward to working alongside Golf Ontario and the team at Woodington Lake,  to deliver a world class tournament.”

Mike Kelly, who was named Golf Ontario’s Executive Director in 2015, played a large part in revitalizing the Ontario Open and says he is looking forward to adding to the legacy of the event with the Mackenzie Tour’s involvement. “The Ontario Open is steeped in tradition and history and has a long list of distinguished winners. We were thrilled to bring back the Ontario Open in 2019 to Woodington Lake Golf Club and equally thrilled with the success of the event. To now join forces and take the event to the next level with The Mackenzie Tour – PGA TOUR Canada is an exciting time for Golf Ontario and we believe this will be one of the marquee events on tour next year”.

The 156-player event will be played on the Legend Course at Woodington Lakes Golf Club, a 36-hole facility just North of Toronto. Measuring out at over 7,000 yards, the Legend Course opened in 1995 and is built on over 200 acres of rolling terrain.

John Chetti, General Manager of Woodington Lake Golf Club says that the facility is absolutely thrilled to be hosting such a world class event: ”Woodington Lake is truly a special piece of property located just north of Toronto, and The Ontario Open was a huge success in 2019. Our Legend course is a great test of golf and having some of the best golfers in the world tackle it as part of The Mackenzie Tour – PGA TOUR Canada is special for all of us at Woodington Lake and we look forward to hosting an extraordinary event”, said John.

Craig Loughry, Golf Ontario’s Tournament Chair, will serve as Tournament Director of the event. On top of his experience with Golf Ontario, Loughry was also Golf Canada’s director of handicap & course rating and was named the International Association of Golf Administrators President in 2017.

The full 2020 Mackenzie Tour schedule will be announced in the coming weeks.

The Mackenzie Tour - PGA TOUR Canada is a series of tournaments played across Canada each summer, where tomorrow’s stars begin the path to the PGA TOUR. The leading 10 money-winners at the end of each season earn status on the Korn Ferry Tour for the following year. The Tour’s alumni include 41 PGA TOUR players and 231 Korn Ferry Tour players since 2013. The Mackenzie Tour’s mission is to deliver a PGA TOUR experience for its members, fans, volunteers and partners in order to develop the future stars of professional golf and enrich the communities it visits.

Golf Ontario is Ontario’s Provincial Sport Organization focused on enhancing participation, elevating performance and supporting the passion of golfers in Ontario. With over 100,000 individual members and 450 member clubs, Golf Ontario is one of the largest golf associations in the world.  From rating courses and keeping the integral rules of the game intact, to growing the game at the grassroots level and hosting the best amateur tournaments in Canada, Golf Ontario is a passionate group dedicated to shaping lives through Golf.

Woodington Lake Golf Club is home to 36 holes of picturesque golf in Tottenham, Ontario, just north of Toronto. The original course, The Legend Course, opened in 1995 and is built on over 200 acres of rolling terrain. Carved from towering pine forest and nestle around Woodington Lake, this course Is truly legendary. The newest addition to Woodington Lake Golf Club is the Legacy course, a true mix of Links and Stadium styles. With very challenging water hazards, along with fast and undulating greens, the Legacy course will keep golfers of every skill coming back for more.

About The Ontario Open

The Ontario Open has a storied history dating back to 1923, making this Championship one of the oldest Championships in the world. Past champions of this event is a who’s who of Canadian and International golf, and includes the immortal Sam Snead, Canadian golfing legends George Knudson and Moe Norman, as well as seven-time champion Nick Weslock.